Drink as is, preferably without milk and sugar.

Can be enjoyed cold, especially on a hot summer’s day. However, ensure that you keep the tea in the fridge for no longer than 48 hours.

Can also be use in bath water to treat and prevent skin rashes and sensitivity.

Safe for pregnant and breastfeeding woman.

Rooibos Tea (SA) contains antioxidant properties that fight free radical damage on the inside and outside of the body when applied topically.

Laboratory studies and studies done with animals show that the tea could possibly slow the ageing process, including the progression of dementia.

A study in Japan found that aspalathin in Rooibos tea helped to improve the glucose uptake of muscle cells in Type 2 diabetes, thus helping to maintain normal blood sugar levels.

Rooibos can help fight allergies by boosting the production of cytochrome P450, an important enzyme that helps to metabolise allergens. Japanese researchers found that when Rooibos is consumed regularly as a beverage, it helps to improve the allergy status as a result of the increased levels of this enzyme in the body.

Anecdotal evidence also suggests that Rooibos acts as a digestive aid and anti-spasmodic, thereby relieving stomach cramps and colic in babies, as well as symptoms associated with pancreatic sufferers. Rooibos is also used to relieve nervous tension and stomach and bowel irritation, easing the painful symptoms of urinary system diseases such as prostitis and cystitis.

Chrysoeriol in Rooibos acts affectively as a bronchodilator, with an associated effect on lowering blood pressure and relieving spasms.

Plant-derived oestrogen, Phytoestrogen, has the potential as an alternative for oestrogens in hormone replacement therapy.

Rooibos helps to soothe skin irritations and is also excellent for skin conditions such as eczema, psoriasis or dermatitis. It helps to soothe nappy rash and improves acne. Rooibos tea contains no harmful chemicals or preservatives, which may produce allergic reactions or further skin damage. Rooibos contains zinc, which is essential to the skin’s metabolism, as well as its own natural alphahydroxy acid, which is believed to smooth and refine fine lines and wrinkles.

Rooibos has a low tannin content (only 1 – 4%), which means that it doesn’t inhibit the absorption of iron (something that black tea does).

Researchers in Spain found evidence that Rooibos protects the liver against the accumulation of fat and can help to prevent metabolic disease. It also helps to reduce cholesterol, tryglycerides and free fatty acids.

Rooibos tea can possibly aid in the relief of heartburn, as it has antispasmodic properties which have been known to calm heartburn.

Rooibos tea is frequently used as a natural home remedy to help insomnia.

To conclude: Researchers know of no side effects associated with the use of Rooibos tea, so it can be consumed freely. It is also safe for pregnant and breastfeeding women and young children.

There are no reviews yet.

25th Edition Perfume for Him 50ml 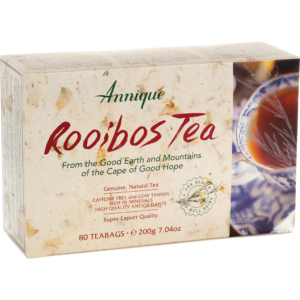